“A bolognaise is rich in flavour. The completed sauce should have enough body so that the liquid does not separate when it’s added to the pasta. It should not be too thick either – the bolognaise sauce should coat the pasta, rather than sit as a thickish lump on top”.

A bolognaise sauce is a versatile recipe and is the base or starting point to many Italian recipes.  Here is an easy to follow recipe and tips to make the process of making a bolognaise easier and much more enjoyable. 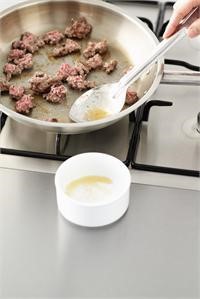 Copyright © The Main Meal 2013
Recipe and pictures from: www.themainmeal.com.au

Step 1
Cook the mince in small batches, about 250g each batch. Adding a little oil to the mince rather than adding it to the pan. Heat a pan until moderately hot and add a batch of mince, being careful not to crowd the pan.

Crumble the mince over the base of the pan rather than adding it in one clump. Let this first side of the mince colour a little before using a fork to break up the larger pieces. As it cooks, tilt the pan slightly and spoon away the liquid or blot the liquid up with paper towel. Using a moderately high heat will also help any liquid evaporate.

Once the liquid has been removed, the mince will cook quickly, so keep it moving to ensure it browns evenly, but doesn’t dry out. Repeat with remaining batches of meat. 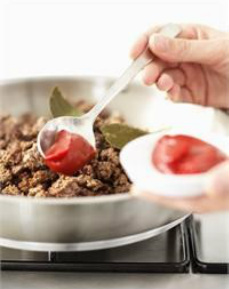 Copyright © The Main Meal 2013
Step 2
Once the mince is brown, transfer it to a bowl. Repeat this step with any remaining batches of mince. Reduce the heat and then add onions and garlic to the pan, let them cook until just tender. Then return all of the mince to the pan with the sauce ingredients. 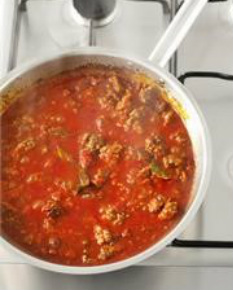 Copyright © The Main Meal 2013
Step 3
Bring mince sauce to the boil, reduce heat and simmer, stirring occasionally. If you have the time, don’t hurry the process. Reducing the sauce gives it more flavour.

The mixture should simmer gently, uncovered for about 45 minutes to ensure depth of flavour. It is best not to rush it, but if you are pressed for time 25 or 30 minutes will be near as good.

Tip: Add Extra Vegetables
Adding extra vegetables is a great way to increase vegetable intake and help you and those you are cooking for achieve the 5 serves a day.

Try adding Grated zucchini and carrot or a finely chopped a handful of fresh mushrooms (you can also use a food processor to finely chop the ingredients). Extra vegetables should be added after the onion have been cooked. Add them and cook for 3 minutes, until they are is really soft.  Then add the browned mince and sauce. Simmer as usual.


Click here to go on to next super skill.